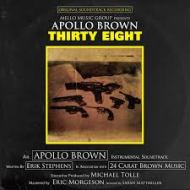 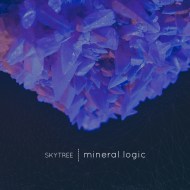 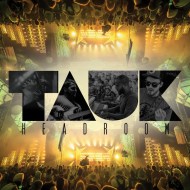 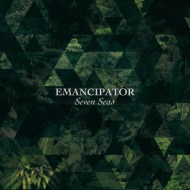 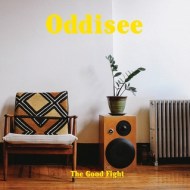 This gritty crime-noir soundtrack may exist without any actual visual accompaniment, but like all great instrumental music, the imagery is contained within the tone, pacing, tempo, and harmony. Apollo Brown is one of the musical sages of modern Detroit, and here he seeks to memorialize the struggles of the streets in the 1970′s, telling tales of deterioration, heartbreak, alienation, and loss through his stoically striding brand of instrumental hip-hop. His beats portray emotion in a fascinating manner, bouncing forth with reflective dignity, stoic but entrenched, punctuated by evocative strings and powerful minor chord bursts of motown brass. The quirky ambiance of Madlib’s Movie Scenes release, (volumes 1 & 2 in his Beat Konducta series), comes to mind at times. Recent focus on brown’s musical mind has been directed towards his new LP Grandeur, which came out several weeks ago to widespread acclaim, but as opposed to the wealth of big-name rappers that command the focus on that album, here the spotlight rightfully lingers on the gifted man behind the boards. This 2014 release (through the emerging hip-hop collective Mello Music Group) serves as a reminder that with a certain steadiness, tenacity, and style, much like the once-elegant buildings that bore witness to the gradual dilapidation of Detroit, you can rise above to ultimately see better days.

A swirling, cerebral offering from NYC-based Evan ‘Skytree’ Snyder that conjures recollections of esoteric ritualism and awe-struck wonder. I should’ve posted this a week or two ago, so you could’ve paired it with the theatrics of the blood moon lunar eclipse for a truly transmogrifying experience. The presence of live instruments within such an alien environment makes for an undoubtedly futuristic listen. The tempos are slow and the textures are surreal, like a vision of dubstep from another realm. This is ambitious, kaleidoscopic electronica for curious minds.

Quite simply, these guys are absolute beasts. Rarely do you find a band who are able to showcase this much dexterity within staggering demonstrations of power, but TAUK clearly make no apologies for stealing faces. Their sound is a huge one, and each member seems to have an endless supply of melodic ideas, or rhythmic ones in the case of standout drummer Isaac Teel. This instrumental quartet from NYC have been making certain to leave their mark on the festival-oriented jam scene, achieving upper-echelon status on the electronic rock sides of things more rapidly than most upstart acts could even imagine. They tour frequently, and actually hang out at the fests they play, immersing themselves in the experience and making connections with new fans. On stage, they’re an impeccably tight ensemble, to an attention-snatching degree. There are three covers in the mix, and all but one of these live recordings came from their shows in February and March of this year, showcasing an exciting prog-rock/funk/jam fusion band at their stunning best.

The latest project from Portland transplant (via Virginia) Doug Appling, Seven Seas features his easily-recognized downtempo sound expanded in a multi-colored direction. It’s not clear which Seven Seas are being referenced in the title, but one would imagine that the waters are benevolent, placid, and inviting. His beats grew in potency back when he enlisted Ilya Goldberg’s talents on violin, and this is the next logical step in the same direction, with a wealth of featured instrumentalists upgrading his sonic palette. It’s not unlike the approach Bonobo utilized when enlisting a mini-orchestra for his Black Sands release, but with more hints of smooth jazz than bass-driven electronic fusion. Within this LP’s twelve tracks, you’ll encounter hammered dulcimer, clarinet, sansula (a new kind of kalimba), didgeridoo, tambura (a long-necked lute), sax, mandocaster, flute, synths, and all sorts of auxiliary percussion. Your personal mood is what will determine whether the music takes on a mournful, melancholy tone, or a bittersweet one of relief and internal triumph.

At this point, it’s pretty evident that when people throw out worthless generalities like ‘hip-hop is dead,’ what they’re really saying is, ‘radio rap doesn’t appeal to me anymore (rightfully so) and i’m a failure at the internet and don’t know how to find good music on my own.’ Well for these helpless souls, sinking in a sea of materialistic mediocrity and off-putting braggadocio, consider Oddisee a long-awaited life preserver. Even with the density of lyrics throughout, you can spend the entire album listening carefully to his words, marveling at his thoughtful subject matter, and appreciating his wide variety of flows. Different cadences for different songs, the way it should be. By prioritizing versatility, The Good Fight avoids easy categorization within any particular scene of rap, and the beats, entirely self-produced, are laced with healthy doses of soul, jazz, rock, orchestral textures, and of course bass and drums; a little something for everyone. Oddisee, real name Amir Mohamed, has international roots that allow him to transcend the petty regionality that frequently serves as a limiting factor in hip-hop; born and raised in Maryland and the global-minded Washington DC area, with roots in the Nile confluence city of Khartoum, Sudan, a new home base in Brooklyn, and currently in the midst of a massive world tour (with a stop in Austin at Empire on October 29th), he eschews boundaries in the admirable process of creating music that will be as relevant in 2025 as it would’ve been in 2005.