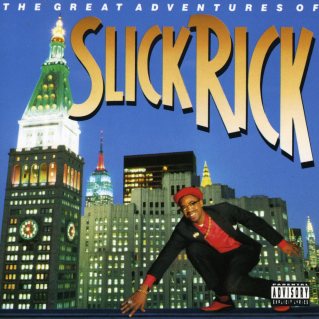 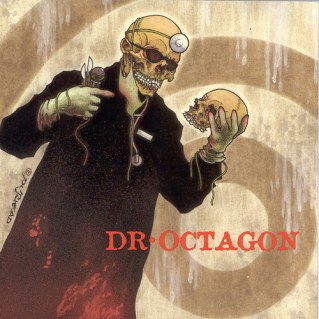 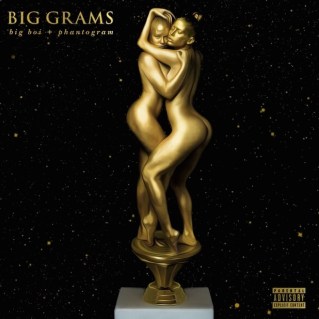 Slick Rick broadcasts live and direct from a strange comic book universe full of dishonest women, delirious dope fiends, and whimsical vocal stylings. The entire album sounds like a superhero reading the “last time on…” introduction to your favorite Saturday morning cartoon. More than half the songs have coherent narratives, a heavy count even for the story-rhyme-heavy late-eighties (see: De La Soul). Our narrator-protagonist still sets aside plenty of time to contemplate his own originality (yay for rap music!), and his claims are more than justified. His voice, while always remaining his, passes through a variety of tones, animating every verse and making the verse-verse-verse-verse song structure most rappers couldn’t nearly pull off feel entirely natural. Rick is charming, animated, and authoritative, as all who have great adventures should be. His use of dubbing only enhances these features, allowing the rapper to shift between and layer vocal tones as well as execute dizzying (yet somehow still conversational?) flows across beats that, at times, border on comedic. His style isn’t just another dated relic of the past studied and brought into the contemporary world by more recent rappers; it’s a forward thinking creative font that could readily find a place even in the contemporary rap atmosphere. Sure, the record is from 1988, but the styles are timeless and timelessly influential. This record’s legendary status is solidified by the nods and homages it still garners a quarter century after its release from underground titans and innovators like El-P (who references Rick at least once or twice per album, sometimes more than once in the same song) and Aesop Rock (who lifted the concept for Rick’s “knock ‘em out the box, Rick” interlude for “Catacomb Kids” off of 2007’s None Shall Pass). The Great Adventures of Slick Rick is currently chillin in Yung William’s recommendations section down at Exploded Records. It’s good. Trust me.

There’s a horse in the hospital. And blue flowers. Or at least lots of acid and Dan the Automator and the twisted mind of one Dr. Octagon, the Jupiter-born horrorcore gynecologist as likely to seduce a patient as to botch a surgery and reduce the same patient to a scarred husk of a human. Maybe even both. Dude is villainous. Dude is intergalactic. Beats are intergalactic. Flows? Bookoo. Find me a weirder rap album and I’ll take a scalpel to your neck, have an alas-poor-Yorick-I-knew-him-well moment with your skull, and jettison your corpse into space with your false claims tucked under your tongue like pennies for the afterlife. There’s no other appropriate response. Earth people take note: rhyme schemes this sloppily dense only come along once every ever and this is that time. The sci-fi rap aesthetic and self-monstrosify-ing (not a real word, but Keith would prefer it this way) lyrics that would become a staple of turn-of-the-millennium rap found their foundational perfection on Kool Keith’s operating table. This record is Dan the Automator’s first foray into collaboration with a rapper, and set the precedent for his monumental presence on seminal records like Deltron 3030 and the self-titled Gorillaz debut. It also helped him garner the respect and authority to contribute to projects such as Handsome Boy Modelling School and Men Without Pants. Keith himself used his credibility to lose his credibility with a string of inconsistent projects and label fiascos, a combination of events befitting any legend’s career. Part of the album’s magic is in its singularity. No other Kool Keith record comes even close to this degree of mastery and innovation, and that only builds on the man, myth, and monster. The edition we have in the shop has a holographic cover and looks real dope. If gazing upon its glory does not change arrangements on your face like a Nazi officer gazing upon the lost arc then certainly listening to the record will change arrangements on your face like a sadistic plastic surgeon living in an underwater utopia. It’s dope. But don’t trust me; I might be a shapeshifter.

Big Grams is a collaboration between Atlanta legend Big Boi and electronic/rock/pop/what-even-are-genres-anymore duo Phantogram. In no world would anyone think of Big Boi as an artist with anything left to prove; dude has been killing it for nearly twenty-five years, both as a member of Outkast and as a solo artist. Some Big Boi verses are better than others, but no Big Boi verse is disappointing. Phantogram, though, is somewhat less vetted in the hip-hop sphere, with exactly zero collaborations with notable rappers prior to this record. Collaborations of this kind risk aesthetic incoherence, often resulting in unintelligible and unlistenable trash heaps that feel like unskilled fan-made mashups or the same sort-of-ok-but-not-very-interesting-song copy/pasted for forty minutes. This record sounds like neither; it’s a strong work of genre-straddling that carries with it much of the spaciness of Aquemini, integrating Sarah Barthel’s sung vocals with a level of naturality rarely achieved in songs this firmly rooted in hip-hop. Rap songs featuring female singers are almost invariably corny and forced, but these instrumentals bridge the rift between Barthel and Big Boi’s styles; this record could easily drop one of the vocalists and maintain excellence, but their somehow-functional union teases out the versatility of these beats wonderfully, enhancing the experience rather than creating a frustrating hodge-podge of undeniably skillful yet somehow terrible musicianship. Barthel and Big Boi As if his rapperly skill and ability to make this unlikely collaboration somehow work, Big Boi flexes his fame and influence to bring in some killer guests; soon-to-be-not-so-underground golden boys and veterans Killer Mike and El-P (both of Run the Jewels) grace, grip, and slay         the penultimate track, 9th Wonder brings the most-hip-hop vibes on the record, and the infinitely unlikely Skrillex (for real) closes the album out. I’m not sure how this works, but it does, and it’s wonderful. The version we have in the shop is on 180 gram audiophile vinyl for those among us with refined (read: pretentious) pallets.